– Thought about Russia yet? You thought right!

The Russian Pharma market is considered to be one of the most profitable emerging markets in the world. In 2012, its market size was estimated at over 22 billion USD. Healthcare sales in Russian pharma are projected to amount to 35-38 billion USD by the end of 2015, with increasing annual growth rates. The Russian pharmaceutical market is among the top 10 largest pharmaceutical markets in the world.

Russia’s pharma market is ranked 7th world-wide in terms of turnover. Its capacity reached over 23 billion USD in 2014. Since it is still recovering from the consequences of the global crisis, the prognosis for future years is very positive.

The market is divided into three segments: the commercial pharma, the commercial parapharmaceutical and the governmental segments. The first of these is the largest by far. 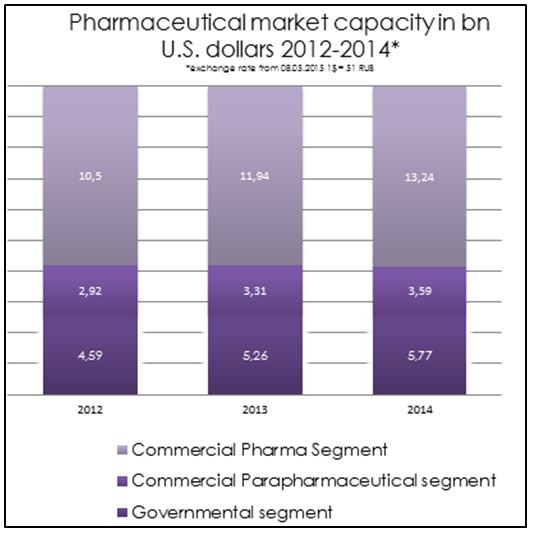 One of the peculiarities of the Russian Pharma Market is its focus on imports (according to different sources between 65% and 76% of medicines consumed by the population of Russia are produced abroad). The leaders of imported drugs in Russia are SANOFI-AVENTIS (France) and NOVARTIS (Switzerland).

Further, the market can be divided into three other main groups of participants: 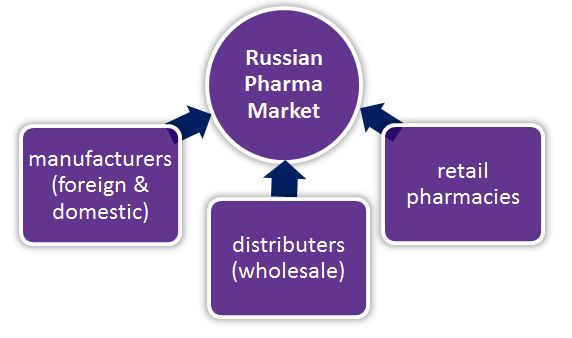 Due to its focus on imports, as well as the geographical characteristics of Russia, a great deal of attention is paid to the wholesale sector.

Pharmaceutical distributors provide access to foreign drugs and allow for the distribution of drugs produced locally. Leaders in this area—along with leaders in drug production—are quite stable, and the fifteen largest companies control up to 78% of the market, a very high percentage relative to international norms. Distributors are trying to expand their networks with branches in many cities to ensure the stable flow of the required number of products. The majority of sales, both in the commercial and in the hospital segments, depend on their work. According to experts, there are about 2,500 enterprises engaged in the wholesale branch of pharmaceutical products in Russia. 2,300 of these enterprises are small.

The Russian Rx segment is larger than the OTC sector, but sales in both sectors have been increasing from year to year. Between 2013 and 2014, the growth of Rx products was slightly higher–at about 12.7%–while OTC sales increased by 8,7%. 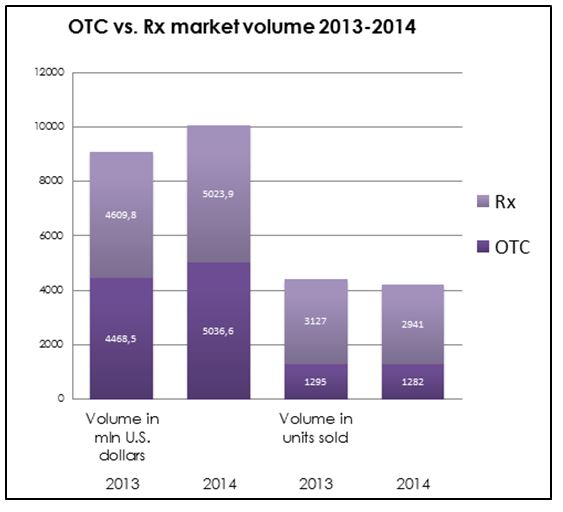 Reasons for the prosperous market and remaining difficulties

Here are four beneficial factors that play a role in the Russian Pharma Market: 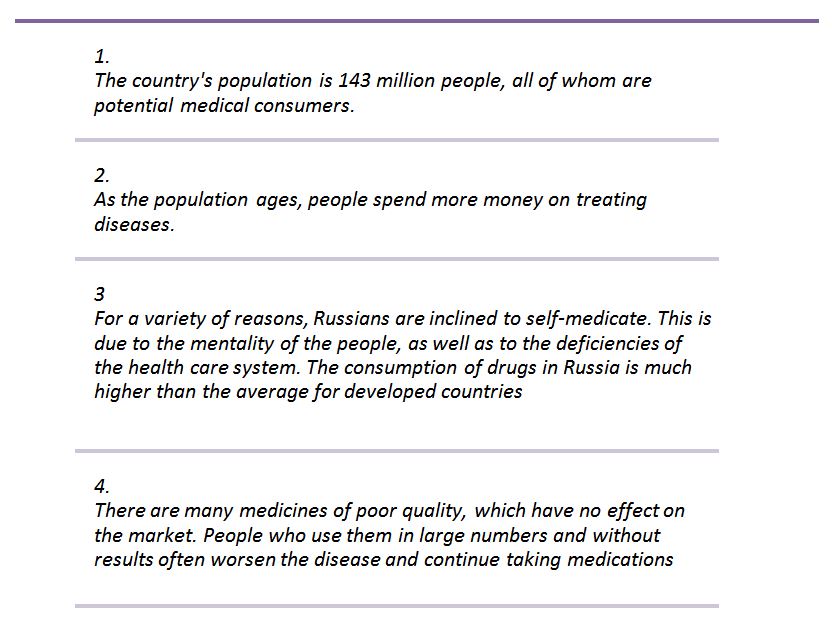 At the same time the domestic Russian pharma market faces a number of obstacles and difficulties that seriously complicate and hinder its development. The most important of these problems are: 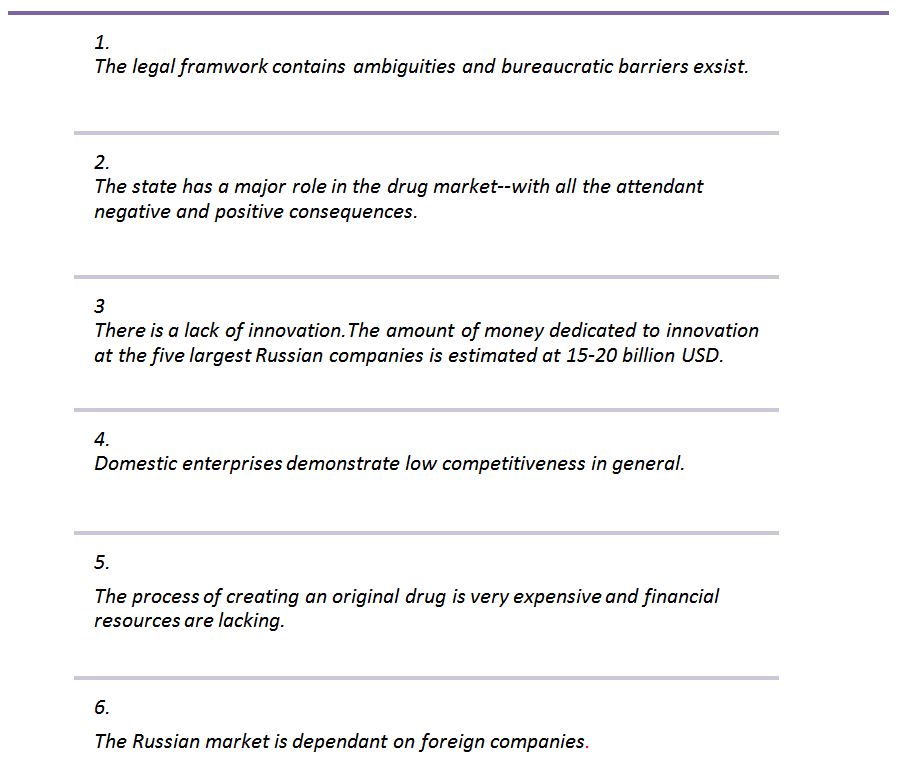 Currently government regulation has a very large impact on the domestic pharma market of the Russian Federation; strategies for the replacement of imported drugs with Russian ones are being developed. For example, Russia pharma producers remain in a leading position when working with vital and essential drugs, because surcharges depend on the manufacturer’s price. The launch of new drugs is also one of the most important areas of the market. Many importers are increasingly looking for the opportunity to start their own contracts for production in Russia. The state seeks to support and motivate foreign pharmaceutical companies to engage in this kind of cooperation, because it generates the opportunity both to create new jobs and to improve cash flows to the state budget.

The government is actively taking measures to regulate the pharmaceutical market, in particular by increasing local production. Since 2010, many attempts in this direction have been undertaken. In general, the strategic discussion began five years ago, when the strategy “Pharma 2020” was only in the development stage. Since then it has become one of the three main documents that will define the development of this branch for the decades to come. The two additional documents consist in the outline for a target program, “The Development of the Pharmaceutical and Medical Industry of the Russian Federation for the period up to 2020 and further,” and “The strategy of drug provision to the population of the Russian Federation till 2025”.

The strategy “Pharma 2020” conjectures that the internal market will increase the share of domestic products up to 50% by 2020. There are also plans to change the nomenclature of drugs and to increase the percentage of innovative products to 60% of companies’ portfolios. A great deal of money is invested in research.

As a result, the Russian Pharma industry is currently under reconstruction and modernization. The state is expending considerable effort to allow domestic manufacturers to lead the field. But the success of these initiatives will only be seen as we approach 2020, when the planned strategies are implemented.

We, Chameleon Pharma Consulting, have experts with a minimum of twenty years of experience in the global healthcare industry, including the Russian Pharma Market. This experience has been accrued by working on numerous projects, from internationalizing products to optimizing individual international pharma strategies. We are active in segments such as Consumer Health, Pharma, Medical Devices and Cosmetics, and are here to support your business and plans for engaging in Emerging Markets worldwide. For more information on our services, please continue browsing our website.

Abramovich is going to invest US $1 Bln. in Skolkovo Realty Project

Owners of Russia’s Pharmacy Chain 36.6 sell 30% of their shares